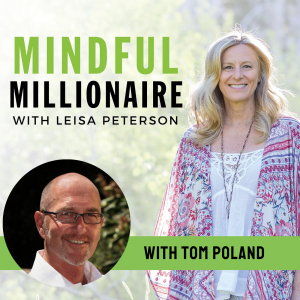 My goal is to awaken consciousness particularly around money, business, relationships. Today’s conversation is no exception. I’m interviewing my friend Tom Poland who has been a mentor to me over this past year. He has so much good information about things he has covered in his many books that he’s written including a more recent one about webinars. But what I love about Tom is his sincerity and his drive for creating consensual sales experiences. And, while we’re not going to talk exclusively about that. I just want you to be listening for the fact that Tom wants to be in relationship, in client-relationships with people who are fully showing up in that relationship, who understand that they are coming to him to learn and to grow. There’s no funny business. There’s no manipulation. There’s nothing but the truth. This is the way I feel like all of our sales and marketing needs to be moving in this direction. And Tom is just really inspiring to me when it comes to that. So enjoy this conversation. I’m sure you’ll take a lot out of it and I’m just so inspired by Tom’s work. Enjoy…

Tom is a Marketing Mentor who started his first business at age 24, and has gone on to start and sell four others, taking two of them international. In that time, he’s managed teams of over 100 people and annual revenue of more than 20 million.

These days Tom’s thing is “Leadsology: The Science of Being in Demand”, which is a blended learning program that gives professional advisors a model for generating a flow of high-quality, inbound, new client enquiries into their businesses almost every week of the year.

Tom’s work has been published in 27 countries and he’s also shared international speaking platforms with the likes of Michael Gerber of E-Myth fame, Richard Koch from the 80-20 Principle, Brian Tracy and many others.

Are you a business owner seeking ways to increase the cash flow generated by your business? Inquire about Leisa’s IPROSPER Business and Money Advisory Mastermind here.

To receive daily inspiration and more wealth resources, join the Facebook Mindful Millionaire Community and connect with thousands of like-minded people who share your interest in wealth building and the inner journey.