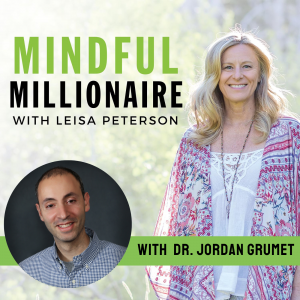 Today, my interview is with Jordan Grumet who also goes by Doc G. As a hospice doctor who teaches people and inspires people about their relationship with money, Jordan paved a path to questioning many assumptions about money and the pursuit of happiness. In our conversation, Doc is sharing what he’s discovered along his life journey and how that relates to living a better life, to making better choices for yourself and why he decided to write his new book, Taking Stock. I think it is life-changing for so many people when you take a step back and question the assumptions you are making and decide how you can not only have a better relationship with money but live more fully as a result. Enjoy.

Doc G shares with us his insights:

Jordan Grumet was born in Evanston, Illinois in 1973. His interest in becoming a doctor was ignited when his father, an oncologist, died unexpectedly in the prime of life. This profound loss not only inspired him to practice medicine, it has given him a unique perspective as a financial expert, challenging him to think deeply and critically about concepts like wealth, abundance, and financial independence.

After graduating from the University of Michigan, Jordan received his medical degree from Northwestern University, and began practicing Internal Medicine in Northbrook, Illinois. He currently is an associate medical director at Journeycare Hospice.

After years of blogging about financial independence and wellness, Jordan launched the Earn & Invest podcast in 2018. In 2019 he received the Plutus Award for Best New Personal Finance Podcast and was nominated in 2020 and 2021 for Best Personal Finance Podcast of the year.  His book, Taking Stock: A Hospice Doctor’s Advice on Financial Independence, Building Wealth, and Living a Regret-Free Life is being published by Ulysses Press in August 2022.

Are you a business owner seeking ways to increase the cash flow generated by your business? Inquire about Leisa’s programs:

To receive daily inspiration and more wealth resources, join the Facebook Mindful Millionaire Community and connect with thousands of like-minded people who share your interest in wealth building and the inner journey.Pr