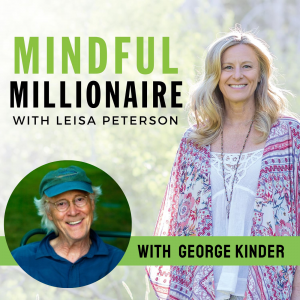 I am so happy to have you here today, I am interviewing my good friend, George Kinder. George is known as the father of life planning. He was a financial advisor who wrote this amazing book that impacted me many years ago around The Seven Stages of Money Maturity and inspired my work. And today, we’re having a very different kind of conversation because he’s talking about his latest book which he is giving away for free. And, it is poetry that’s oriented to the present moment. He ended up chronicling with photographs and with these poems over the course of a year what he experiences in the place that he lives on a pond not that far from Walden pond. But how the nature in this seasons affect his life and it’s just a really fun conversation. I love George’s work, and I know you’ll really enjoy it.

He shares with us his insights:

Harvard-educated George Kinder revolutionized financial advice for more than 35 years by training over 4,000 professionals in 30 countries in the field of financial Life Planning. He founded the Kinder Institute of Life Planning in 2003 after 30 years as a practicing financial planner and tax advisor.

George Kinder’s latest book, Reflections on Spectacle Pond: The Weekly Edition is available as a free email subscription. Inspired by the 30 years he has spent living at the edge of a small New England pond, the book is a meditative guide to living in nature’s cycle, week by week, and moment by moment. Among his seven books, he has written one on mindfulness,  Transforming Suffering into Wisdom, and another book of photography and poetry, A Song for Hana.

Kinder was the first winner of the Financial Planning Association’s Heart of Financial Planning Award which recognizes “individuals who demonstrate commitment and passion in doing extraordinary work to contribute or give back to the financial planning community and/or the public.”  He has been named “One of the 35 most influential people in financial services,” “One of the top Icons & Innovators in the financial planning industry,” “the first of 15 transformational advisors whose vision most changed the industry,” and has been inducted into the Financial Planning Magazine Hall of Fame. In 2017, he was awarded the Transparency Trophy by the Transparency Task Force. He has appeared on many radio and television programs and his expertise has been featured in The Financial Times, The Wall Street Journal, New Model Adviser, Forbes, Time Magazine, FP Today, The Journal of Financial Planning, Investment News, and The New York Times.

Kinder is known for his dynamic presentation skills and has given speeches at professional conferences on five continents. He has spoken at Harvard University, Boston College, Coventry University, Merrill Lynch, Smith Barney, Fidelity, Charles Schwab, Allianz, AXA, The Financial Planning Association, The Personal Finance Society, and The National Association of Personal Financial Advisors.

Kinder currently resides in Massachusetts and spends several months per year in London and Hana, Hawaii.

Are you a business owner seeking ways to increase the cash flow generated by your business? Inquire about Leisa’s programs:

To receive daily inspiration and more wealth resources, join the Facebook Mindful Millionaire Community and connect with thousands of like-minded people who share your interest in wealth building and the inner journey.Pr